A return to normal was always expected, if not this year then next. The Federal Reserve would continue with its normalisation programme, then the European Central Bank would join in, after which - finally! - the Swiss National Bank would be free again to conduct monetary policy within a less suffocating corset and raise rates as well. But it was not to be. With both the Fed and the ECB changing course in recent months, interest rate normalisation has been pushed back by at least another few years, raising the question of when there will ever be another rate rise again.

Most market participants have been caught by surprise, as data from the Deloitte CFO Survey shows. This spring, 86% of CFOs in Switzerland were expecting higher interest rates by 2021. And most were expecting large increases: 59% forecast rises of at least 75 basis points, pushing Swiss interest rates out of negative territory.

These rate rise hopes were the by far the most optimistic since the introduction of negative rates in 2015. At that time 45% of CFOs thought negative rates would be gone two years later (and so by 2017). But by 2017, only 34% of CFOs foresaw a rise within two years (Chart 1).

Chart 1. CFO expectations of when interest rate normalisation would begin in Switzerland 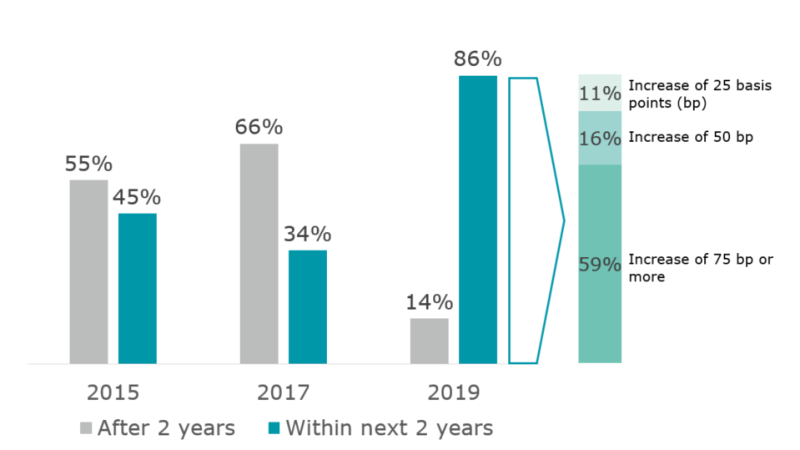 A reaction to the prolonged period of low interest rates the banks has been to reprice their mortgage and loan products, reduce deposit interest rates and introduce negative interest rates on the cash holdings of institutional investors. But they have still shied away from introducing negative interest rates for retail depositors. In addition, some banks have tried to compensate for any potential loss from interest rate differentials with new fee- and commission-based offerings, such as structured products and transaction banking services.

Nevertheless, net interest income still constitutes the largest part of total revenues for Swiss retail banks (Chart 2). In particular, a number of cantonal banks and other retail banks generate over 75% of their revenues from interest rate margin-based business. Only the Swiss universal banks and the larger cantonal banks are, thanks to their business mix, less dependent on their interest rate margin-based revenues.

Chart 2. Net result from interest operations as a percentage of total operating income 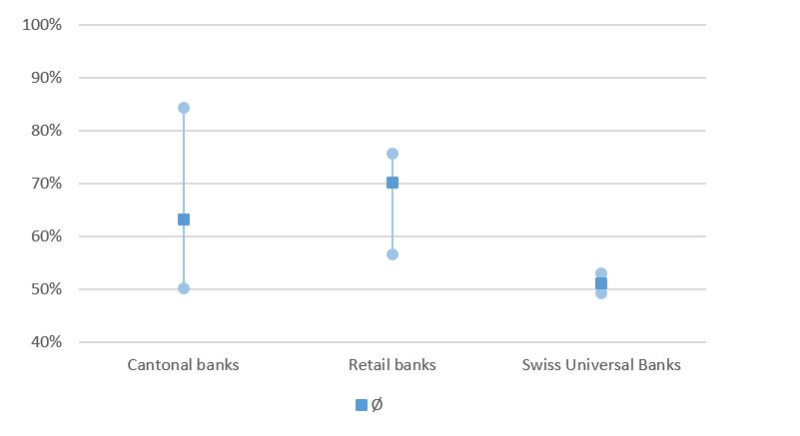 Source: Deloitte calculations on the basis of 2018 annual reports of the Swiss banks

As low interest rates persist, distorting the environment in which they work, many retail banks are now revisiting their strategy. They are looking at ways to pass on negative interest rates to clients, to further diversify their revenue streams and also to reduce their costs, to help compensate for lower revenues. In other words, the retail banks have realised that their past assumptions about interest rate normalisation have not materialised and that additional measures are required to maintain their profitability going forward.

The necessary strategic measures need to reflect the changing competitive landscape and client expectations. In the past, Swiss retail banks profited from two factors. First, Swiss banking clients have shown a strong reluctance to switch banks. Second, recent market entrants have not (yet) offered integrated services, such as bill payments, joint account packages and mortgages. The rapid increase in user numbers in Switzerland for some of the fairly basic new offerings, such as Revolut, may indicate that a more comprehensive offering would be able to gain a substantial market share and challenge the existing players further. Considering also higher client expectations in terms of a better user experience and lower willingness to pay for standard services, the challenge for retail banks will be to offer relevant, user-friendly services at a low cost.

This will only be feasible by employing new digital tools, leveraging analytics, increasing the user experience, and engaging in ecosystems. In addition, the banks have to decrease the time-to-market of their new offerings and in parallel reduce costs in a structured manner. This requires the employment of new technologies, such as cloud, an increase in process automation, and the introduction of agile ways of working.

Florian has more than 10 years of experience in strategic projects and business development in the Financial Services industry. At Deloitte he heads the Strategic Development of the Financial Services Industry in Switzerland. Prior to joining Deloitte Switzerland, Florian worked as the head business development for a Swiss Asset Management boutique, as head Strategic Projects & Business Management for Group Governmental Affairs of a leading Swiss bank, and as a strategy consultant and manager for a leading Financial Services strategy consultancy. Florian has gained in-depth knowledge in the areas of corporate strategy, built of new businesses, business model transformation, restructuring and stakeholder management.