On 1 January of this year, IFRS 9 became effective for banks. The changes introduced under IFRS 9 include a new approach to the provisioning of loans and receivables that is based on an expected credit loss (ECL) concept. For certain banks, the transition to the new approach could lead to a severe increase in provisions associated with their loan portfolio and, hence, to a severe reduction of their shareholders’ equity base. In principle, an increase of provisions reduces regulatory core capital on a dollar-for-dollar basis. For IRB banks, this principle applies only where provisions are in excess of the regulatory expected loss (EL).

FINMA has followed the Basel Committee’s guidance, and has issued a revised Circular 2013/1 on eligible capital of banks in consultative form that includes a five-year transitional arrangement.

How will the transitional arrangement function in practice?

The proposed transition period is five years long and during that time, percentages of the “new” impairment provisions that a bank recognises as a result of the IFRS 9 adoption will be added back to CET1 capital.

The FINMA hearing for the Circular 2013/1 ended on 31 January 2018, and all changes will be effective as of 1 January 2019 – one year after the international time schedule. Banks can make a one-time decision upon adoption whether they wish to apply the transitional arrangements or not. Institutions that adopt the approach will have to disclose their own funds, capital and leverage ratios both with and without the transitional arrangements to maintain comparability.

How are the transitional adjustments to capital calculated?

Under the transitional arrangements, FINMA proposes to partially reverse the day 1 CET1 impact due to the adoption of ECL provisioning as per below schedule. The impact is determined on an after tax basis. The impact is fixed upon adoption and amortized linearly until the end of 2022 at very latest. The FINMA approach is different to the approach taken in certain other jurisdictions where a dynamic transition method applies. A dynamic transition approach takes changes in ECL during the transition period (e.g., over five years) into consideration. FINMA proposes a semi-annual linear amortisation schedule over five years. In case of an adoption of IFRS 9 on 1 January 2018 the following transitional adjustments to CET 1 apply: 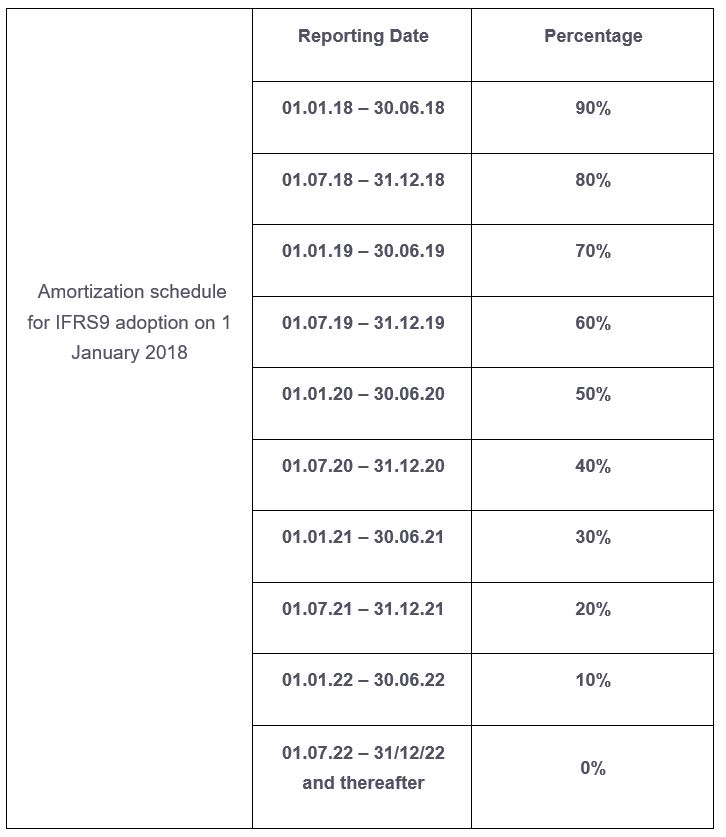 What should firms be considering now?

The transitional arrangements provide firms with an extended time period to absorb the day 1 capital impact of an IFRS 9 adoption. In general, loan portfolios with lower credit quality will contribute most to the CET1 impacts of provisioning based on an expected loss concept. For banks in Switzerland, the additional provisions and related CET 1 impacts are expected to be manageable. The applications of the Swiss transitional arrangements is operationally simpler than dynamic approaches implemented in other jurisdictions. Banks need to weigh the complexity of additional disclosure against an increase in CET1. In particular, for benchmarking banks’ CET1 ratios within Switzerland and internationally, it will be important to factor in transitional arrangements applied by the different banks.

We are pleased to support you in case of any queries.

Philipp brings more than 15 years’ experience in risk management and capital regulation of banks. He has outstanding expertise in relation to capital efficiency having worked more than 8 years in Investment Banking at Credit Suisse in both London and Zurich. He offers a distinctive combination of comprehensive technical knowledge with a deep understanding of the commercial implications of the new regulation across different businesses and products.

Ralph has more than 30 years of experience in the banking industry and worked for two major global banks where he held several senior positions representing the banks in various international and Swiss industry, regulatory and accounting standard setting committees.