As one of the globally leading financial centres – currently placed 6th in the global financial centres index – Zurich has traditionally enjoyed a good reputation within the financial services industry. When putting it in direct comparison with London, the worldwide most important financial centre, one can clearly see that there is still room for improvement. The development that London has exhibited in recent years is nothing short of impressive. But how did the capital of the UK develop that edge? Is the British model transmittable to other financial centres? What can the Swiss financial centre change, in order to keep up with its international competition or even strengthen its position in the market?

Technological progress, deregulation and liberalization are all key factors in preserving and boosting a financial hub’s competitiveness. In order for innovation and technology to spur the development of a financial centre, governments have to create favourable conditions. This especially holds true for an industry that is currently going through one of its most drastic changes in history. Low entry barriers, regulation that allows for flexibility and a fair tax regime are all crucial elements for attracting innovative financial services providers and investors as well as further developing the Fintech sector.

The impact that Fintechs will have on the Swiss financial centre is expected to be significant. The general notion in the market is that with its growing Fintech scene, Switzerland is well-positioned for the future of financial services. Nevertheless, comparing the Swiss Fintech scene with that of other globally leading financial centres shows that Switzerland still has a long way to go in order to become a Fintech hub. 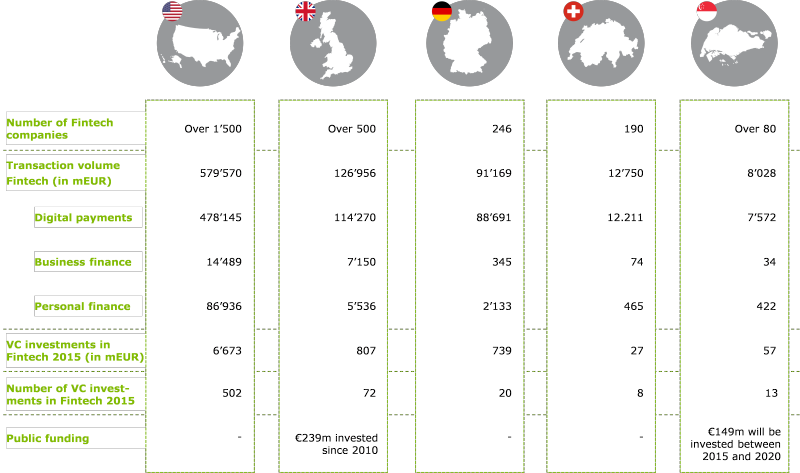 In April 2016, a working group consisting of representatives of the Swiss Department of Finance, the State Secretariat for Economic Affairs (SECO), and the Swiss Financial Market Supervisory Authority (FINMA) was appointed by the Federal Council to identify aspects that would – in the short to medium term – increase Switzerland’s attractiveness for the Fintech industry.

The working group recently released a first draft of its ideas – which included maximum time limits for transaction accounts, a newly introduced license for financial innovators and adapted tax exemption limits on deposits for banking licenses – to selected market participants. Their reactions (as seen in the media) suggest that the proposed adaptions go in the right direction, though sometimes lack the necessary decisiveness. For example, the introduction of the license for financial innovators – a simplified approval resulting from a risk-reduced business model – was well-received, the associated investment limit of CHF 50 million however was deemed too low.

Next to the adjustments that will take effect in the medium term, most market participants identified active support from the government as well as involvement of experts in policy decision-making processes as key factors for the promotion of the Fintech sector.

In recent years, Swiss Fintech associations (e.g. Swiss Finance Startups and Swiss Fintech Innovations) have upped the pressure on the government by demanding more support and participation when it comes to promoting the Swiss Fintech sector. The measures introduced by other financial centres served as a model for their demands. For example, back in 2015, London appointed a special envoy responsible for representing the Fintech sector’s interests in the UK. The introduction of such a role within Switzerland would, apart from the obvious representative advantages, also have a positive medial effect, further increasing the attractiveness of the Swiss financial centre.

Switzerland has also a lot of catching up to do when it comes to making the Fintech sector more appealing to investors. London offers two models of tax deductions, which provide a relief of up to 50% on income tax for start-ups or a relief of 100% on the capital returns tax for investors. In contrast, up until March 2016, Zurich still based the property tax for start-ups on the valuation of the company. This was abolished due to market participant pushing for a change. As of March 2016, investments from financing rounds are not considered as taxable assets of start-ups for the first three financial years. While this adaption indicates the government’s willingness to react to the market’s requirements, it is only a small step in comparison with London’s tax schemes. 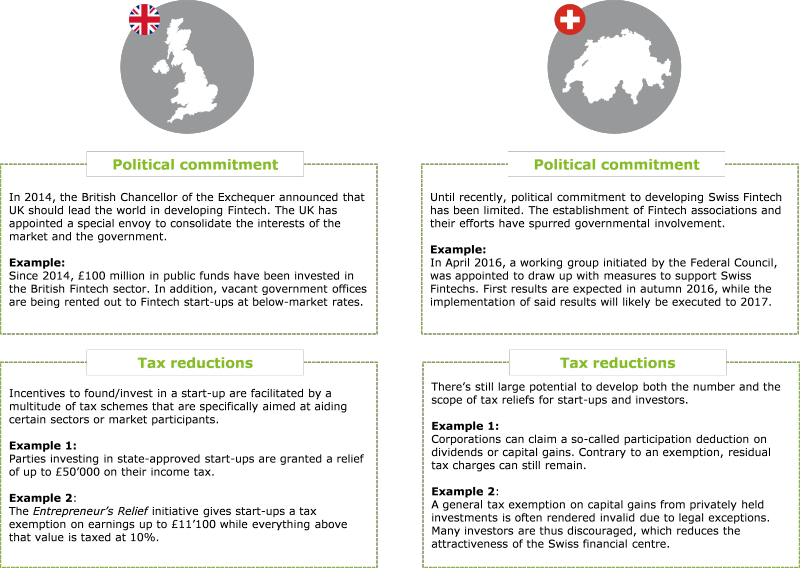 The responsibility of providing prerequisites that attract both start-ups and investors and position Switzerland as a Fintech hub lies with the government (legislators and regulators). Involving Fintech associations and key market participants such as start-ups, banks and investors in current and future initiatives is of course a must. All stakeholders should jointly define a collaboration model and strategy to shape an innovative Fintech ecosystem.

Guidance on how to successfully establish a hub can also be taken from Switzerland’s past. In the 1990s, the chemicals industry in Basel was actively promoted, funds were set up and tax reliefs created. These measures were essential in the foundation of the globally leading Swiss biotech hub. By taking the initiatives applied in London as a role model and building on the lessons learnt from the chemicals industry, Switzerland should be able to take the appropriate next steps that will help it on its long way to establishing itself as a globally leading Fintech hub.

Daniel is the lead author of several growth and innovation related insight reports in wealth management. His specialisation covers corporate and business strategy development, innovation and digital-enabled business model transformation, as well as design and corporate performance and risk management.

Benjamin Ernst is a Manager in the Banking Transformation team. He has been working in consulting for over seven years and supported financial services companies with the definition of new business models as well as the technical implementation of software. Benjamin has been working with asset managers and banks around the topics of regulatory and digital transformation along their value chain.

Stephan Zacke is a Consultant working the Banking Transformation team. In his over 4 years of consulting experience in the banking industry, Stephan has supported banks in several European countries. His projects include large scale regulatory programs, risk analyses and process optimizations for regulatory KPIs as well as the development and implementation of a target operating model for regulatory processes.