Forecasting the results of Britain’s referendum on EU membership is as challenging as trying to predict the impact of a potential Brexit. The run-up to the referendum has seen market volatility rise, while the Swiss franc has already appreciated slightly. Preliminary results from Deloitte’s CFO Survey show that Swiss businesses have become increasingly worried, with financial service companies more concerned than most. The latter need to be prepared to weather a potential storm, and able to react quickly and decisively to take advantage of opportunities created by either Brexit or Bremain.

Will the UK leave?

The referendum is too close to call. Polls indicate a virtual tie. But polls were wrong about the 2015 UK general election and it is not clear that polling accuracy has improved much since then, or even that it can, given the challenges involved. These include differences in polling methods (telephone vs. online), potential polling bias against those harder to reach—such as people at work or looking after children—and crucial assumptions about yet undecided voters.

Another indicator—betting odds—still only puts the probability of Brexit at about a third, and proved a better predictor than polling in the last general election. But they turned out to be less reliable for this year’s Premier League Championship, so clearly bookies can get it wrong too. The betting odds also assume that voters still on the fence will vote to Remain when it comes to the point, which would swing the vote. Turnout numbers are another swing factor, since a high turnout is likely to benefit Bremain, said to need a turnout of over 60% to prevail; that’s just below the turnout for the 2015 general election.

Brexit’s impact on the UK and EU

The impact of Brexit is hard to predict, depending as it does on the political choices of all stakeholders. An amicable divorce, though, seems unlikely, particularly since the EIU might want to stress just how fraught a break-up can be, to discourage other would-be leavers.

EU law prescribes a two-year leaving procedure, during which the status quo would remain in place. Revising UK legislation and redefining the relationship with the EU in that time would be tricky, since EU law is deeply enshrined in UK legislation, including the constitutional settlements with Scotland, Wales and Northern Ireland. It took Switzerland more than a decade to settle on the Bilateral Agreements, which remain a work in progress. So businesses in the UK would probably face uncertainty over regulation and market access for several years.

Brexit would very likely damage the UK economy, resulting in a substantial negative short-term shock, followed by lower output and employment. Greater uncertainty and weaker business and consumer confidence could well lead to recession. Its twin deficits—in the current account and the fiscal deficit—leave the UK economy vulnerable to currency depreciation and lower capital inflows.

Losing a core member would be a massive blow for the EU as well. The EU Common Market would see its population shrink by 65 million people (about 13%), and GDP by EUR 2.8 billion (about 17%). Already struggling with several unresolved major crises and with populist parties on the rise, the EU would be forced to act.

In Switzerland, Brexit’s biggest impact would be felt in the foreign exchange markets, since Brexit would likely create upward pressure on the franc. Anticipating this, the Swiss National Bank (SNB) is prepared to respond, but markets might be tempted to test the bank’s stamina for intervention. The SNB should prevail, but in the short to medium term, expect exchange rate volatility to increase.

While the EU is Switzerland’s largest trading partner, the UK is among the most significant, possibly compounded through indirect effects. For example, the UK is a very important trading partner for Germany; Brexit would hurt the German economy and, by extension, Swiss trade with Germany. Lower growth abroad is likely to result in lower foreign demand for Swiss goods and services.

Brexit would likely see several banks leave London, or reduce their operations there, and they would then be on the lookout for replacement locations. Switzerland might well prove attractive to such banks, but would be competing with financial service hubs in the EU, particularly Frankfurt and Luxembourg, whereas Dublin shares a common culture and language with London and offers liberal labour laws and low taxes.

While Switzerland might enjoy some of the upside from relocations, financial service firms could find Brexit costly. In the short to medium term, market volatility and rising uncertainty would challenge the sector and its business customers. But Swiss wealth managers could benefit from a safe haven effect. Financial service firms should assess the potential impact on their balance sheets and exposure to market volatility, put in place contingency plans for extreme market volatility and communicate their plans to all stakeholders. In the longer term, financial service firms would have to evaluate the impact on customer behaviour, global operations and strategy, regulation and taxes. Those operating in the UK would have to weigh whether changing UK regulations and potentially losing access to the EU market currently facilitated through UK operations would warrant relocation.

Swiss companies have increasingly become worried, with financial service companies being more concerned than most. In Q1 2016, when asked about the impact Brexit could have on their companies, almost 66% anticipated little to no impact and only 17% foresaw negative effects. Asked the same question now, preliminary results from the Q2 survey show that negative expectations have surged to 40%. Financial service companies are even more worried, with half expecting a negative impact.

How would the exit of the United Kingdom from the EU (BREXIT) impact your business? The graph shows cross-sector results, with results from financial services companies in the box. 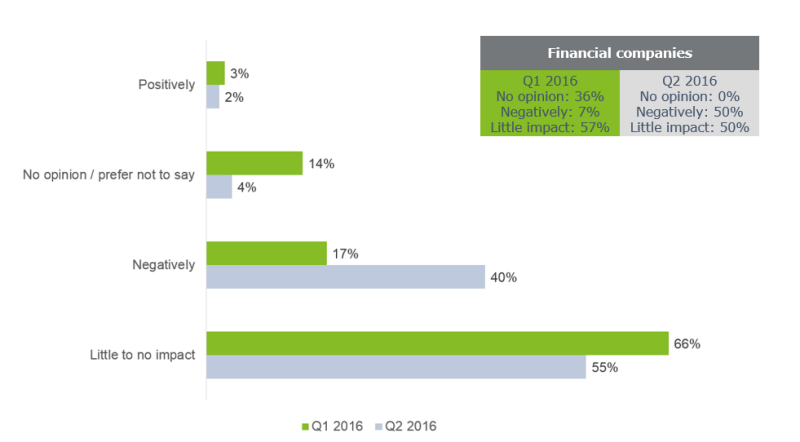 The impact of Bremain

A UK vote to stay in the EU would likely bring a sharp fall in uncertainty and a sense of relief. Rising business and consumer confidence could fuel higher economic growth.

But it would be a mistake for the EU to rest on its laurels and pursue business as usual. The very fact that a core member of the EU is holding a referendum to leave is a stark reminder of the Union’s current shortcomings. Resolving ongoing crises such as the Euro crisis, external migration and geopolitical tension in the east and south will be critical. Improving the EU’s biggest achievement, the Common Market, will also be crucial. A close brush with Brexit might well become a call to action for the UK too, with policy initiatives launched both in London and Brussels. UK citizens could demand that London become more pro-active in determining EU policies. More change can be expected, whether carefully planned by governments in advance or driven by events, such as the upcoming presidential elections in France next year.

Swiss financial service companies should be prepared to weather a potential storm but also ready to react quickly and decisively to opportunities created in the wake of the British referendum, whatever the results. Threats and opportunities are tied to exchange rate changes and volatility. Decisive action, successful bets and appropriate hedging could bring lasting competitive advantage within a few short months.

Join us to as we discuss prospects for the UK & European economies and financial markets, and how businesses and organisations should respond to the changing environment.

Ian Stewart, Deloitte’s Chief Economist, Rick Cudworth, Lead Partner for Contingency Planning, Sally Jones, Director in Deloitte’s Tax Policy Group, and Christiane Cunningham, Director of European Regulatory Affairs, Deloitte Brussels, will discuss: • prospects for the UK and European economies and for financial markets; • the future of the EU and Britain’s place in Europe; • the trade and tax implications of the UK’s changing relationship with the EU; • how businesses and organisations should respond to the changing environment.

For more information and to register, please click here.

Planning and preparing for Brexit 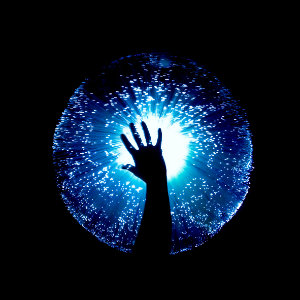 Over the last 40 years UK voters have, on average, been in favour of EU membership, albeit by a fairly narrow margin and with wide fluctuations. Over the last year, opinion polls show a marked narrowing of the pro-EU lead, partly in response to immigration .

Our paper aims to help you plan and prepare for the uncertainties associated with the outcome of the referendum.

Sven leads the Financial Services and Banking practice in Switzerland. Having started his career as a banker he has been providing external advice and assurance services to the industry for over 20 years. Sven has a broad range of experience and expertise covering governance and control, regulatory challenges, investigations, payments and sanctions, project management, IT and Cyber risk. In his previous life he has also been the CEO of an IT services provider.

Michael is Deloitte’s Chief Economist in Switzerland and European CFO Survey Lead. He has been with Deloitte for eight years and leads the Swiss Research team which produces thought leadership publications and studies. Previously, Michael was a consultant and has also held management positions in industries including banking, energy and manufacturing. He has a master’s degree in economics, marketing and a PhD in business administration.